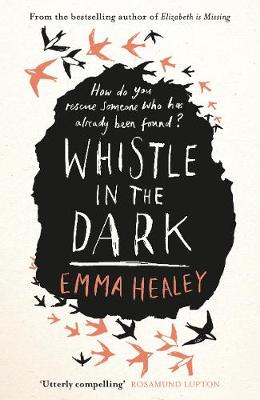 Another book that I was very much anticipating the arrival of this year, especially when the magpie part of my brain started seeing the beautiful evidence, was Emma Healey’s Whistle in the Dark. Her second novel after Elizabeth is Missing, which I absolutely loved when I read it in 2014, so much so that it was in my top three readings for that year. So no pressure for Whistle in the Dark then …

The sun had set behind the building and all the previously golden edges were now gray. The relief Jen felt when she saw Lana again turned into something else, and although she mostly wanted to bundle her up and weigh her, felt the weight of her and did everything to make sure her daughter was really good went there was a thin thread of fear in her too. She was afraid to pull on it but knew she couldn’t resist for long.
“How did you get lost?” she said to Lana, who opened and closed her eyes.

When Whistle in the Dark opens, we go to Jen’s hospital a few hours after her daughter was found after she disappeared a few days earlier. We soon learn that Jen felt an added sense of guilt when Lana went missing on an artistic retreat with her mother to bring them closer together after some difficult times. The question that will soon preoccupy Jen and become the focus of the novel for us as readers is where on earth Lana has gone these four days and what may or may not have happened to her. Lana is silent, but what, if anything, could she be hiding or just too scared to share?

Lana faked sleep as far as London: Jen knew that she was fooling because she had seen her sleep, the corners of her mouth wet, her arms wrapped around each other, her legs spread. She knew that proper, dry sleep in the back of the car was a fiction.

I think Healey stands out in her second novel for the tension and the atmosphere. Not only does the book start with a real dynamic from the start, it persists during the first few days to weeks later when things settle down and return to normal. As normal as it may be for your daughter to start speaking a little differently, the only way to sleep is when she sees the sky and a mysterious cat keeps popping up around your house.

Coupled with the brooding atmosphere, one of the other elements that I enjoyed, if that’s the right word, in Whistle in the Dark is the sense of the “other” that sometimes comes to the fore. We hear of a time when Jen believes she has met a modern incarnation of Rumpelstiltskin. We learn that there are groups online who are all trying to find out what happened to Lana because she was lured into a reservoir by a mermaid who was cheered away by ghosts. Taken to hell by the devil, kidnapped by aliens (my hometown gets an infamous mention that I kind of loved) who are reported to show up in the forest with flashing lights or be forced into rituals of a local cult. This online fever, part of which becomes a larger part of history, reveals the dangers of the digital world, let alone the supernatural or the real, as Jen continues to believe that her daughter was involved in some sort of attack and kidnapping .

Bonsall is located in the center of what is known as the Matlock Triangle, where reports of strange lights, eerie noises and things often float in the sky. One of the reports came from the night Lana Maddox went missing. Did aliens come down and kidnap them before erasing their memories and bringing them back to Earth?

You can sense a “but” coming here and you would be right. I found that after the first third of the novel, the dynamic had changed completely when Lana and Jen both tried to get on with their lives without ever getting on with their lives, even more so in the case of Jen. When both are stuck together at home, it creates a claustrophobic, seductive, easily repetitive nature that feels like wading through treacle. I know that sounds tough. BUT and here is another “but” to combat the last one, after getting away from the book I think that’s how you should feel. After such heightened drama in someone’s life, things will return to “normal” at some point and in many ways there can be a major dip in adrenaline if something big happens in your life. The everyday things of life can return, only they seem to be even more worldly in comparison. I think that was Healey’s intention. It also serves as a quieter period in the novel, where suspicions and theories are further deliberated before the tension builds up again towards the end, which I thought Healey wrote brilliantly.

“Why don’t you take a picture of it for Instagram? The colors are so vivid. ‘
“Nobody cares about a piss scone, mum. That is not the point. Strawberry jam is lame. ‘

I should also add to her that one of the things I loved consistently was how well Healey writes about teenagers, mother-daughter bonding, and how ironic is middle class life and family home life. From the outside world, in cases like the art retreat where they meet Peny, a woman who insists “she could tell if you pronounced her name with a two N”; into the interiors of the family home, where Jen is obsessed with social media and doesn’t understand it at all, but is desperately trying to use it to engage her daughter. The novel also deals with the single parent, sibling rivalry, the rifts in marriages, and more, all of which were written with such wonderful observations of human nature.

Elizabeth is missing to follow what was so loved would be an arduous act. Healey proved again with Whistle in the Dark, interestingly again with lost memories, that they write the lives and scenarios of everyday people going through extraordinary times with compassion, emotions, dry wit and an eye for the intricacies and complexities of human nature can makes her fiction so convincing and poignant. I’m really looking forward to booking three.