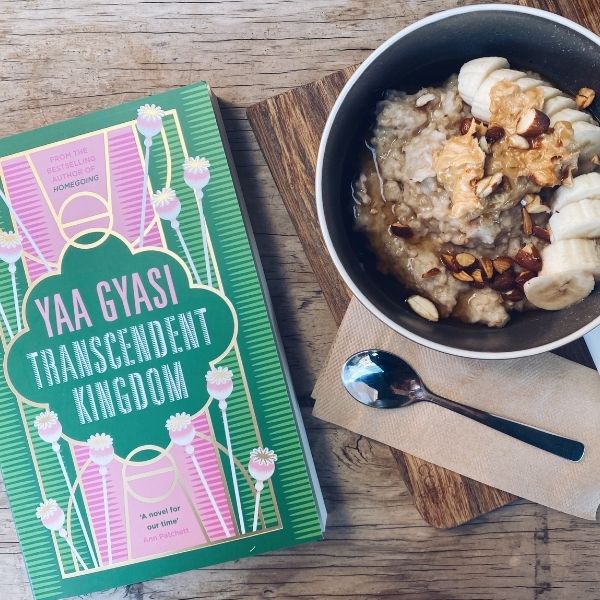 Having worked on the Women’s Prize for Fiction before leaving London for Sydney, I’m following that prize very closely – and one that I try to shortlist every year. I’d already read Brit Bennet’s The Vanishing Half – a writer I interviewed one very early morning on Zoom for the Bondi Literary Salon – when the shortlist was announced in April, and so it was the book I wanted to read the most was the Transcendent Kingdom of Yaa Gyasi. I had read her amazing debut Homegoing while living in Bali in 2017, and the story of two sisters had stayed with me long after I returned to Australia. Eager to see how their second listing fares, I quickly pushed it onto my reading pile and ripped it through in June.

Book Review of the Transcendent Kingdom

A poignant and haunting story that follows Gifty – a fifth year neuroscience candidate at Stanford School of Medicine studying reward-seeking behavior in mice and the neural circuits of depression and addiction – whose family immigrated to Alabama from a small town in Ghana is pursuing their own version of the American dream. They struggle to adapt, assimilate, and integrate into predominantly white Alabama society, and when Gifty’s brilliant brother, an aspiring basketball star, becomes addicted to opioids after a sports injury and her mother falls into a debilitating depression that will haunt her for decades – What follows is a tragic story full of loss, addiction and grief.

A book that explores science and belief, racism and privilege, prayer, religion, grief, the weight of expectations, poverty, depression and addiction, and more. The characters are layered and well designed, the two timelines are flawlessly interwoven, the immigration experience perfectly portrayed.

Transcendent Kingdom fuses a beautifully woven narrative with exquisite writing and a memorable cast of characters to deliver a compelling story that is ultimately an exploration of grief, longing, and a search for meaning.

Yaa Gyasi’s breathtaking sequel to her acclaimed national bestseller Homegoing is a powerful, raw, intimate, and complex novel about a Ghanaian family in Alabama.

Gifty is a fifth year neuroscience candidate from Stanford School of Medicine studying reward-seeking behavior in mice and the neural circuits of depression and addiction. Her brother Nana was a gifted high school athlete who died of a heroin overdose after a knee injury made him addicted to OxyContin. Your suicidal mother lives in her bed. Gifty is determined to discover the scientific basis for the suffering she sees all around her.

But even as she turns to the hard sciences to unravel the mystery of the loss of her family, she starves for her childhood beliefs and wrestles with the evangelical church in which she grew up, whose promises of salvation remain as tempting as they are elusive. Transcendent Kingdom is a deeply moving portrait of a family of Ghanaian immigrants plagued by depression, addiction and grief – a novel about faith, science, religion and love. Exquisitely written, emotionally engaging, this is an exceptionally powerful follow-up to Gyasi’s phenomenal debut.

I loved this article in the New Yorker: Yaa Gyasi Explores the Science of the Soul.

YAA GYASI was born in Ghana and grew up in Huntsville, Alabama. She has a BA in English from Stanford University and an MFA from Iowa Writers’ Workshop, where she received a Dean’s Graduate Research Fellowship. She lives in Brooklyn.

Homegoing is the first historical novel by the Ghanaian-American author Yaa Gyasi, published in 2016.