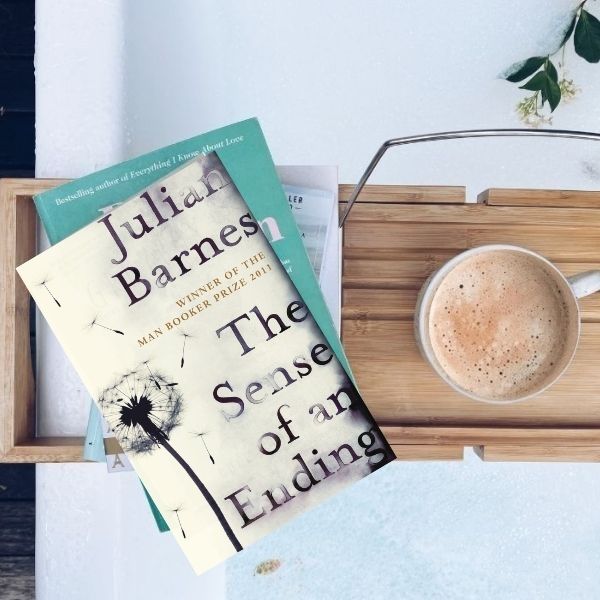 I recently had a chat with a guy named Dan in one of the cafes I go to in Bondi who has the nicest Lagotto Romagnolo named Walter. As always, when I start talking to someone, we start talking about books; and among those he recommended was The Sense of an Ending by Julian Barnes. Knowing full well that it wasn’t just on my reading radar for some time; But since I still had at least two copies in my apartment, I made up my mind to pick them up after I had finished Markus Zusak’s The Book Thief.

The point of a final book review

Having read nothing by Julian Barnes before, I had no idea what to expect, and while the book may seem like a pretty mundane story about the life of a more ordinary man at first, looking back over the years it gets quick clear that the novel has more to offer than meets the eye.

A surprisingly fast and perfectly readable book in which we meet the protagonist Tony Webster in The Sense of an Ending – and a complicated cast of characters who have worked in and out of his life; an ex girlfriend; the school friend who committed suicide; the now ex-wife; the daughter. In the further course of the novel he looks back at memory and history, responsibility and guilt, deception, misunderstandings, aging, guilt, remorse – and of course a safe passive sailing on the smooth sail surface of life, occasionally interrupted by the tidal waves of unexpected upheavals and disturbances ,

Although it is a short and easy story, not a word is wasted and the rhythm of the writing builds up to deliver a poignant and expressive story that offers a lyrical lesson on the ability of memory to play tricks on us.

Ultimately, The Sense of an Ending is a melancholy reflection on the reality of aging, on life, the lies we tell ourselves, and the fine line between fact and fiction man looking back on his often normal life.

The sense of an ending from Julian Barne’s summary

From a celebrated author at the height of his power, The Sense of an Ending expands on a series of extraordinary books that began with bestselling Arthur & George and continued with Nothing to Be Frightened Of and most recently Pulse.

This intense novel follows a middle-aged man grappling with a past he has never given much thought to – until his closest childhood friends return with a vengeance, one from the grave, another incredibly present. Tony Webster thought he left all of this behind when he built a life of his own, and now his marriage, family, and career have fallen into amicable divorce and retirement. But then he is presented with a mysterious legacy that forces him to rethink a variety of things that he thought he understood all along and to revise his assessment of his own nature and place in the world.

The Sense of an Ending is a novel so compelling that one might want to read it in a single session, with breathtaking psychological and emotional depth and sophistication.

Buy The Sense of an Ending at Bookshop.org, Book Depository, Waterstones, Amazon or Amazon AU.

Julian Patrick Barnes is a contemporary English writer of postmodern literature. He was nominated three times for the Man Booker Prize – Flaubert’s Parrot (1984), England, England (1998) and Arthur & George (2005) and won the prize for The Sense of an Ending (2011). He has written crime novels under the pseudonym Dan Kavanagh.

After training at the City of London School and Merton College, Oxford, he worked as a lexicographer for the Oxford English Dictionary. He then worked as a literary editor and film critic. Today he writes full-time. His brother, Jonathan Barnes, is a philosopher who specializes in ancient philosophy.

He lived in London with his wife, literary agent Pat Kavanagh, until her death on October 20, 2008.

Julian Barnes has written a number of other books, including Cross Channel, Talking it Over, The Porcupine, Before She Met Me, Letters from London, and Staring at the Sun.