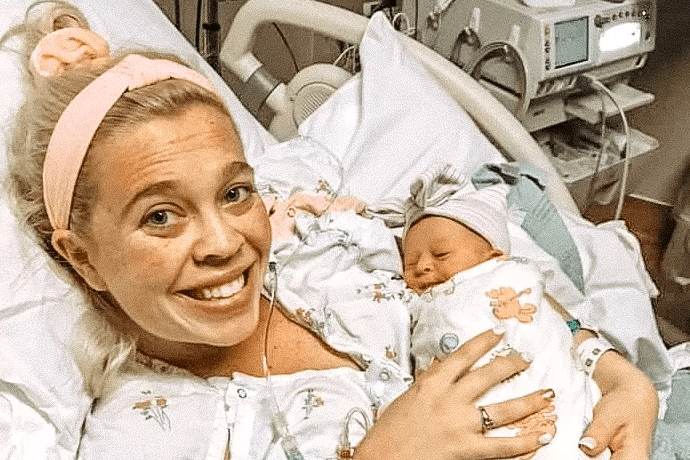 This article was originally published on shelbysaywhat.com

Before going into labor, I loved reading other bloggers’ birth stories. Our work and delivery has been pretty amazing and I’m so excited to share it with the world.

I was in early labor 24 hours before we got to the hospital. Jarrett and I tracked all of my contractions in the notes section of his iPhone. They started around 5 p.m. the day before Maisey’s birth. Although they weren’t intense or frequent enough to worry me.

The contractions became more constant overnight from 1:00 a.m. to 5:00 a.m.
I woke up that morning and the feeling of labor had actually decreased significantly and I became very discouraged. I was sure that I would be ready for labor that morning. (If only I knew … lol)

Maisey was born on her grandmother Kim’s birthday (Jarrett’s mother), so Jarrett went to visit his mother that morning. I was still having contractions so I stayed behind. While Jarrett was visiting his parents, the contractions picked up again. At that point, I sent Jarrett the exact hour and minute of each contraction I had. (Of course, as soon as my husband leaves the house, my contractions came every 5 minutes or so.) The contractions did not last a full minute, so I still felt no rush to go to the hospital.

My sister-in-law taught me to hum through my contractions. That literally saved my life! And when you get as far with work as I do, it’ll sound like you’re trying your hand at a toneless musical. The louder the buzz, the better! Spending most of my work at home has been very peaceful. I had lit my candles, music was playing, and my kittens were near me. I rolled and bounced on my yoga ball until we went to the hospital.

Jarrett and I decided early on that we didn’t want to take antenatal classes. There were a couple of reasons why I didn’t want to attend a birthing class:
1) It’s an 8 hour course (usually on the weekend and I don’t have weekends off) so who has time for it? Especially when you’re pregnant and feeling awful, that’s the last thing I wanted to do in my free time.
2) Every mother I have ever spoken to said “wasted time” and I took her word for it.
3) This third reason contains the greatest truthfulness why I did not seek birth advice because I wanted to be completely open to this experience. I wanted to trust my body and just listen to my inner voice. Women have had babies since the beginning of time. I trusted that I would know what to do at that moment, and that was enough for me. If I didn’t know, I knew the nurses and my midwife would guide me. Which, by the way, they totally did.

I tried to hold out at home as long as possible. I liked being in my own home as opposed to a hospital room. The pain eventually reached a point where it was so intense that I found it difficult to even get up. The “pain” I felt was a feeling of tension in my lower back, just as I experience cramps when I have my period. So I can best describe contractions as more intense menstrual cramps. At that point I called Jarrett and told him it was time to go to the hospital. He had already packed the car full of our hospital bags. Fortunately, we live only 2 minutes from our hospital.

When we got to the hospital, I was already 6 cm dilated. IMPRESSIVE! I think that surprised my midwife and sisters. I can remember how relieved I was when they told me I was 6 cm dilated. My greatest fear was being sent home and telling myself that I hadn’t even started labor yet. Everyone always tells you, “You will know when you are in labor.” I think that’s true, but in my case my water didn’t break, there was no blood, and my contractions only lasted 30 seconds (not the standard minute you are supposed to wait for) so I wasn’t crystal clear when what I was feeling , Contractions were.

When they took us into our birthing room, I was VERY ready for epidural anesthesia. My contractions seemed to be about 1-2 minutes apart and lasted well over a minute. When I got the epidural I was 8 cm dilated. The only thing I emphasized in my birthing plan was getting that damn epidural! As Jarrett would say, “the second” [I] got epidural anesthesia, I was a changed woman. “LOL! I wish he was wrong, but it was so true. I felt so relaxed and ready to have this baby. Any worry I had about going into labor was completely gone. Basically, my epidural changed my life.

My midwife predicted the baby would arrive around midnight. I got pretty relaxed at this point, knowing we had a couple of hours to kill before the baby would come (it was about 8pm at that time). I remember the nurse describing to me how it would feel when I was ready to push. She said “a lot of pressure on my bum” and it would feel like I was going to the bathroom. I looked at her and said, “Yeah .. I’m ready to push if that’s the case.” She almost doubted my certainty. She checked how wide I was. Sure enough, I was about three inches. She called the midwife but was on her lunch break. The poor nurse, I think she just prayed that I could wait another 15 minutes for the midwife to come back.

When my midwife came back (around 8:30 p.m.) she broke my water for me and it was time to start pressing.

A nurse held up my left leg and Jarrett held my right. To my great surprise, when you press (talk about a workout) you hold your breath. At that point I was in no pain, I was just ready to have this baby. It took about 45 minutes for Maisey to arrive at 9:23 pm. No, the impetus that gave birth to Maisey was no different from any of the impetuses before. I just knew I had to be around by watching Jarrett’s face. He was cheering me on all along and when Maisey made her debut his eyes were shining. I will always remember his face when she was born. He was overjoyed and so was I.

BAM! There she was. Little Maisey June was placed on my chest. Two nurses worked to clean them up pretty quickly. She was wide awake and looked at me with her big, beautiful eyes. I was a sobbing hot mess. I originally planned what my first words to her would be, but it all went out the window when I met her. I just cried and kept telling her how pretty she was. I didn’t mean to sound so superficial, but it was true. She was absolutely perfect. I couldn’t believe I wore this cute girl for 10 months. Immediately our family grew and it was the strongest feeling of love I had ever felt.

As for our families, Jarrett coordinated the day with both mine and his family. Bless his heart. Our families arrived at the hospital around 8 p.m. They brought Apple’s card game to Apple’s to kill time. Just after 10 p.m., all of our families rushed to meet Maisey. She was greeted with so much love !!

There were many unforgettable moments on this special day. Jarrett helped me make a list of some of the things that happened during my labor.

Odor: Candle was seaside morning
Weather: Cloudy with sun pauses on and off. 57 degrees. The night before labor was a huge rain shower!
What have I done: Rolling / hopping on a yoga ball between contractions. A
Places you’ve visited: Two days before labor we drove to Bellevue and went to the mall.
Eat: Wendy’s chicken sandwich was my last meal before going to the hospital. That was my greatest desire throughout my pregnancy.
Music: Kacey Musgraves, Golden Hour Album
TV Show: Stranger Things
Movie: How to be single (oh the irony)
What I Wore in the Hospital: Orange Boho Maxi Dress

Find her here on Instagram or here on her blog!

RUBY’S BIRTH STORY – EXACTLY AS IT SHOULD BE