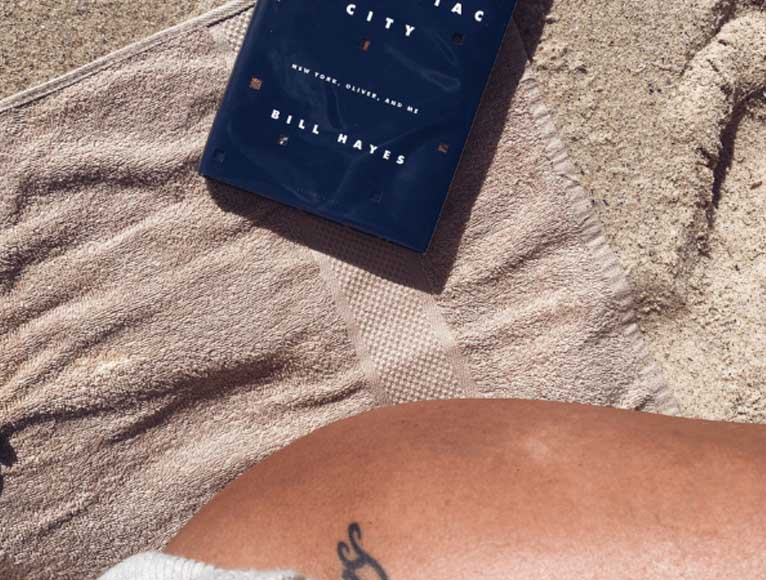 Some of my favorite books are set in the Big Apple – A Little Life, Places I Stopped At on the Way Home, The Catcher in the Rye, The Goldfinch – but it wasn’t until about a month ago that I first heard about Insomniac City by Bill Hayes. In one of the many Facebook groups I’m just a member of to discuss an unwavering passion for books, someone asked, “What’s your favorite book in New York?” and a number of people named Insomniac City as one of them. When I found a used hardcover edition at Gertrude + Alice, I quickly added it to my growing collection of unread books and spent a balmy afternoon on Bronte Beach reading it cover to cover.

The kind of books that instantly take you to another time and city, from the moment I started Insomniac City, I didn’t want it to end. A beautiful portrayal of two of Bill’s great loves – Oliver Sacks and New York City – Insomniac City, a beautiful collection of vignettes from his time in the Big Apple, and both the insignificant and notable moments that were put together to create his tapestry Time there.

A representation of both the tender and the destructive nature of love; An example of the often simple and complex beauty of human life, Insomniac City is an intricately woven portrait of New York’s mesmerizing urban jungle. It’s a celebration of love. in all of its many forms. From unimportant meetings with strangers on the sidewalk to silhouettes of his time with Oscar, Insomniac City pays homage to everyday life and the ordinary that sit so neatly next to the moments and memories that change our beings.

I have already quoted my favorite part of his memoir in a post I wrote about my 5th Australian anniversary. But I’ll leave it here again As someone who has often dreamed of writing a book about my time Down Under, perhaps the most relevant line to me was when Hayes wrote about his need to leave New York to write about it. It is a term that I have thought about at times when looking at my own collection of words that were not written about Sydney. He also wrote about talking to his former agent, Wendy, who once said about New York that she loved it so much that she couldn’t stand the thought that it would go on without her. “Yet,” he wrote, “the thought of leaving it, knowing how much I would miss it, is too painful to think about.” A feeling that is so exquisitely applicable to anyone who has had a great love affair with a city, similar to mine with Sydney.

Affectionate, moving, heartbreaking, and beautifully watched, this prosa-rich story is an ode, laudation, and love letter to the city – and the man – who stole Bill Hayes’ heart.

Bill Hayes came to New York City in 2009 on a one-way ticket and only had a vague idea of ​​how he would get along. But when he was forty-eight and had spent decades in San Francisco, he longed for change. He mourned the death of his partner and quickly discovered the deep comfort of the city’s incessant rhythms, the sight of the Empire State Building against the night sky and New Yorkers themselves, kindred spirits whom Hayes, a lifelong insomniac, met late. Night walks with his camera.

And he unexpectedly fell in love again with his friend and neighbor, the writer and neurologist Oliver Sacks, whose exuberance – “I don’t fear death so much as I waste my life,” he tells Hayes early on – is recorded in vignettes while. What comes out is a portrait of Sacks in his most personal and lovable form, from falling in love at the age of seventy-five to illness and death (Sacks died of cancer in August 2015).

Bill Hayes, who has received a Guggenheim Fellowship in non-fiction, is a regular contributor to the New York Times and is the author of several books.

As a photographer and writer, his photos have appeared in The New Yorker, Vanity Fair, Granta, the New York Times and the CBS Evening News. His portraits of his partner, the late Oliver Sacks, appear in the most recent collection of Dr. Sacks suite of recent gratitude essays.

Hayes was visiting scholar at the American Academy in Rome, received a scholarship from the Leon Levy Foundation and resident writer at the Blue Mountain Center. He has also been visiting professor at Stanford, NYU, UCSF, the University of Virginia, and the New York Academy of Medicine.

If You Loved Insomniac City, You Might Also Like: The Anatomist: A True Story of Gray’s Anatomy, Five Quarts: A Personal and Natural History of Blood, Sleep Demons: An Insomniac’s Memories, How New York Breaks Your Heart, Like Us Now live: Scenes from the pandemic, drunk and disordered: Bill Hayes Story; Devon to Australia through the bottom of a glass.