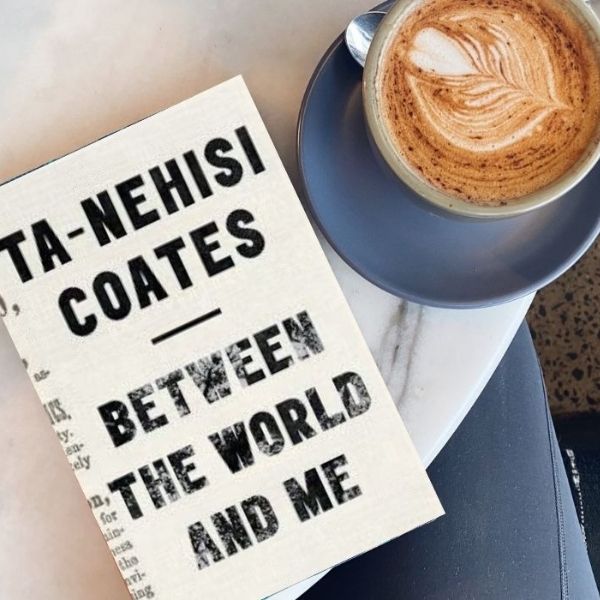 While Ta-Nehisi Coates’ Between the World and Me has been on my radar for some time, I didn’t buy a copy until after an interview with author Cole Brown on my podcast through his Desert Island Books. Towards the end of my conversation with Cole, I asked him which – of the eight books he had selected – he would have chosen if he only had room for one; and he immediately chose Between the World and Me; Reason enough to make it a priority over the other books I had planned for July.

It’s been a while since I’ve read something so sobering; Since Covid first appeared almost eighteen months ago, I have relied on literature as a form of escape from the world and spent many evenings seeking solace between the pages of a book. And yet, despite its serious subject matter, Between the World and Me is also one of the few books of recent times that I have read in a single session; and from the first page it is clear why the late, great Toni Morrison called it “required reading”.

Between the world and me book review

Written in the form of a letter from Coates to his fifteen-year-old son Samori, Between the World and Me is a powerful and poignant exploration of what it means to grow up black in modern America. Not dissimilar to James Baldwin’s The Fire Next Time (also one of Coles Desert Island Books; also on my current reading pile) – which contains two essays, one of which is called My Dungeon Shook: Letter to My Neffew on the One Hundred Years of Emancipation – Between the Welt und mich is a compelling, challenging and uncomfortable read that fully deserves its broad applause from the critics.

At its core, Between the World and Me is a serious, sincere, raw, painful and honest letter from a father to a son that reveals Coate’s fears, frustrations and anger for the world his son will grow up in in the light of one’s own experiences of the author. He writes about the endless, senseless murders or the many, many black men who have lost their lives only because of the color of their skin; He remembers a friend who was murdered by the police, exploring education and privilege and the nuances of the black experience in modern America.

An infinitely quotable book, the prose is rich and eloquent and nicely strung together; which offers a stark contrast to the harrowing realities of a life marked by racism. Passionate, deep, and very personal, Between the World and Me is a book absolutely everyone should read.

My favorite line; the final sentence of the book: “Through the windshield I saw the rain coming down in leaves”.

Between the World and Me from Ta-Nehisi Coate’s summary

In an in-depth work that spins from the greatest questions in American history and ideals to a father’s most intimate concerns for his son, Ta-Nehisi Coates offers a powerful new framework for understanding our nation’s history and the current crisis. Americans have built an empire on the idea of ​​”race,” a falsehood that harms all of us but hits hardest on the bodies of black women and men – bodies that are exploited through slavery and racial segregation and are now threatened, imprisoned and murdered from all circumstances. What is it like to inhabit a black body and find a way to live in it? And how can we all honestly count on this eventful history and free ourselves from its burden?

Between the World and Me is Ta-Nehisi Coates’ attempt to answer these questions in a letter to his adolescent son. Coates shares with his son – and his readers – the story of his awakening to the truth about his place in the world through a series of insightful experiences, from Howard University to the battlefields of the Civil War, from the South Side of Chicago to Paris its childhood home to the living rooms of mothers whose children’s lives were taken as American pillage. Beautifully interwoven with personal narrative, reinterpreted history and fresh, emotionally charged reportage, Between the World and Me clearly illuminates the past, confronts our present and offers a transcendent vision for a way forward.

Buy Between the World and Me at Bookshop.org, Book Depository, Waterstones, Amazon or Amazon AU.

I loved this Vanity Fair article about the beautiful power of Ta-Nehisi Coates.

Ta-Nehisi Coates is the national correspondent for The Atlantic. His book Between the World and Me won the National Book Award in 2015. Coates receives a MacArthur Fellowship. He lives in New York City with his wife and son.

Ta-Nehisi Coates has also written The Water Dancer, We Were Eight Years in Power, and The Beautiful Struggle.